Each artistic proposal is an opportunity for new collaborations with other artists (musicians, circus artists, dancers, visual artists, authors, playwrights, lighting designers) and other disciplines (scientific researchers, philosophers, technicians, etc.). Over the meetings, a hard core is formed. 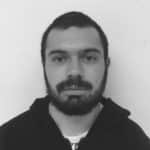 In 2008, Corentin Abeille started his studies at the Conservatoire d’Art Dramatique in Marseille, where he discovered plays and directing. His practice of directing led him to get interest into technical questions, specially light and sound. In 2010, Corentin became a general manager from an association based in Marseille « Le train en marche ». He got taught on sound system, live but also in studio. He incorporated then, the Institut Musical de Formation Professionnelle in Salon de Provence in order to round off the theoretical part of this particular field. Within those 2 years of study, he took part of many tours from Jazz band and latin music band. Some could still cross him on the road along with band or theater companies (C. Du Dromolo, Rodeo Spaghetti, Théâtre de l’Entrouvert, …). In 2013, he is hired by the Théâtre de la Mer where he ensures a periodical work as technician. Also, working as technician during festivals in Region (Lez’arts au soleil, Tendance Clown, Fêtes vénitiennes de Martigues…). 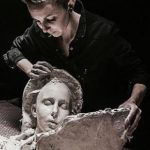 Following a high school diploma, option applied arts, Hélène Barreau studied at the University of Aix en Provence in Performing Arts (Bachelor level) from 2007 to 2010. In 2009, as part of her studies she collaborated for the first time with Élise Vigneron on the show Traversées. From 2010 to 2011, she worked with the Théâtre de Nuit company as a puppeteer in the show La loba. She joined the ninth class of the École Nationale supérieure des arts de la marionnette in Charleville-Mézières and graduated in 2014. During the summer of 2013, her collaboration with Élise Vigneron continued on the show Impermanence for which she built the objects manipulated. She is a performer and puppeteer in La spectacle d’été, directed by Sylvain Maurice and produced by CDN de Sartrouville. 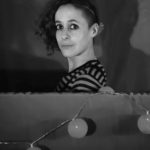 After a theater diploma and a DEUG in Performing Arts, Sarah Lascar trained for two years at the Samovar school in Bagnolet. Then, she joined the seventh class of ESNAM (National School of Puppetry Arts) from which she graduated in 2008. When she left school, she set up a company, The Theater Elaborates and creates three shows which she ensures the staging: Shhh…, Wanted Calamity Jane and, Fleuve. Today Sarah returns to the set, as an actress and puppeteer. She works with the Royal de Luxe and its Giants, V.O Compagnie (L’Homme à l’Envers), the Théâtre de l’Entrouvert (Anywhere, L’Enfant) and the company Art Zygote (L’Assassin sans unscrupule). 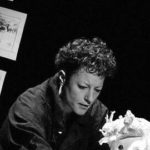 In addition to his studies in Performing Arts at the University of Paris III Sorbonne Nouvelle, Cécile trained in acting and setting up scenery with the Troupe de l’Epée de bois at the Cartoucherie de Vincennes in 2001 to 2004. She then trained in the arts of puppetry at the Théâtre aux Mains Nues in Paris and then at ESNAM (National Superior School of Puppetry Arts in Charleville-Mézières) for three years. She has since worked with several companies, including the Elaborate Theater, the Night Theater, the director Alain Gautré, the Tas de Sable – Ches Panses Verte company, the Royal de Luxe company and the Entre Eux Deux Rives company. Since 2014, she has been collaborating with the company Théâtre pour Deux Mains with which she notably creates her Transit show. 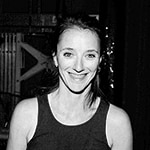 She finished her training at TNS in 2007. She continues a faithful collaboration with Alain Mahé, composer and musician, in the shows of François Verret Sans Retour, Pierre Meunier From the bottom of the gorges, Sexamor, Ko Muroboshi Krypt, Daniel Jeanneteau Les Aveugles in which she participates in the development of the show. She takes part alone in the sound creation work in dance for François Verret Do you Remember, Cabaret, in the theater with Guillaume Vincent La nuit tomb…, Le petit Claus et le grand Claus, Pauline Ringeade Le Schmürz or Les Bâtisseurs d’Empire, Assoiffés , Mathieu Roy Dramas de Princesses, Amour Conjugal. In November 2014, she presented a choreographic and sound piece Reprise, written and interpreted in collaboration with Yasmine Youcef. In addition, she works as a stage manager on national and international tours of the shows she creates or follows, but also as a stage manager at the Festival In d’Avignon since 2007. She trained at IRCAM in 2009, and comes back with Nightfall … and The Blind. She also follows a Belgian musical project KO’N’RV where she accompanies the musicians live. At the start of 2011, she created, as a collective, a company based in Strasbourg, L’Imaginarium. 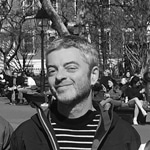 Thibaut followed the entire degree at the Beaux Arts school in Avignon. He obtained his diploma in 1998 and engaged himself through many collective expositions in Europe. He co-created plenty of musical formations, such as « Insert » and joined « Libertalia » improvisation group and experimental violin. He took part within several creation from the collectif « Le Larynx ». Since 2007, he has been working as a Technical manager at the 3bisF, contemporary art venue, As well as for many arts companies (L’Individu, Attention Fragile, Skappa, l’Art de Vivre, Théâtre de l’Entrouvert,…) for whom he has ensured sound, light, stages or general technic. He is also sound manager for the festival « Les rencontres de Haute Romanche ». 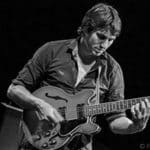 Jazz guitarist by training, composer, producer, Pascal Charrier was born in 1976 in Marseille (Fr) and lives in Saignon in the Luberon (Vaucluse). Insatiable researcher of sounds and colors, as a guitarist and composer, he mixes timbre research, rhythmic architecture and trance. He works on forms with very acoustic sound referring to a traditional Jazz sound but also on forms involving electronics and sound signal processing. He plays 6-string electric and acoustic guitars as well as Oud. He also works as a composer for creations for contemporary visual theater (Théâtre de l’Entrouvert – “Impermanence”, “Anywhere”, “Traversées Fragment”). He has been the main engine and captain of the Naï No Ship since its creation. 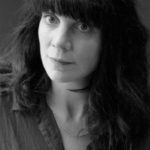 Leaving the conservatory in 2000 after having been in the classes of Dominique Valadié, Jacques Lassalle and Mario Gonzales, I work as a theater performer with Ramin Gray, Joël Jouaneau, Sylvain Maurice, Charles Tordjman, Robert Cantarella, Frederic Fisbach, Julie Brochen, Vivianne Théophilides, Michel Dydim, Alain Françon, Anne Margrit Leclerc, Frédérique Mainguand, Madeleine Louarn, Stéphanie Peinado, Mireille Perrier, Alice Laloy, Lucie Valon on pieces from the classical as well as contemporary repertoire. In 2004, I co-founded the collective F 71, and created until 2014 four shows Foucault 71, La prison, Qui Suis-Je Outre?, Notre corps utopique, all from the work of the philosopher Michel Foucault . Today, we work from the classified ads of “Sandwich”, a Liberation supplement published in the 80s. Interested in dance, I followed internships in particular with Georges Appaix and I participated in 2006 in the creation of the SET choreographic show by François Raffinot. I collaborate with Cyril Bourgois, Élise Vigneron and Alice Laloy, puppeteers, as playwright, director of actor or manipulator actor. I am continuing my clown training by participating in several workshops and I recently played, in 2017, Funny bird a show by Lucie Valon.

He discovered contemporary dance at the age of 18, when he joined the Hivernales team (direction Amélie Grand) in Avignon. He perfected himself very quickly, thanks to the training “Stage manager” specialization: LIGHT of the I.S.T.S. in 2000 and “Audio and digital in live performance” in 2002. In 2006, he joined the Avignon IN festival team and worked with Josef Nadj, Miguel Barcelo and Roméo Castellucci. In 2010, he took the technical direction of Emanuel Gat Dance, and left for 5 years of international tours. He will be called as technical advisor when ordering: Marseille ballet, Warsaw Opera, Ballet du Rhin, Opera national de Paris, … In 2013, he joined the collective C dans C, which will become the Cie Amala Dianor, and will participate actively creating 8 shows over 4 years. At the same time, he will be involved in Ali Moini and Ladji Kone as general manager and lighting designer. 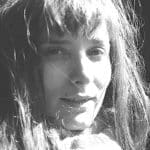 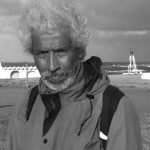 Theater manager since 1989, he also builds sets, accessories, steel, wood … He particularly likes stage management to be as close as possible to what is happening on stage. He works and has worked with the company Théâtre de Nuit, Ilotopie, Délices DADA, Théâtre de feu, at Les Amandiers, at the Scène Nationale de Cavaillon, at the Festival d’Avignon, at the Comédie de Reims, at the Théâtre des Salins in Martigues … He is part of the dance group led by choreographer Thierry Thieû Nang. He died in May 2016. 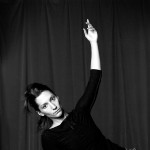 Trained in socio-cultural anthropology at the National University of Rosario, Argentina, Eleonora is an author, performer and circus and theater director graduated from the Fratellini Academy, France (2009). She also obtained the certificate in circus dramaturgy at the Center National des Arts du Cirque, France (2019). In 2015 she created the company Proyecto Precipicio to bring her first creation in France CAE “Ça tomb” (2015) followed by Lugar (2017). Within this company, she also develops several educational and territorial action projects. In this same approach, in collaboration with the philosopher Diego Vernazza they develop the PHILOCIRQUE workshop, a leap into the world of ideas. In 2013 she joined the company Théâtre de L’Entrouvert and collaborated with Élise Vigneron in the plays: Impermanence (2013) interpreter, Anywhere (2016) choreographic accompaniment and LANDS, habiter le monde (2021) in co-writing. She is currently working in dramaturgy and accompanies the staging of “PLI” by Inbal Ben-Haim and “Des ses Mains” by Cie Lunatic. She is part of the research collective “La vie des lignes” (Cie. Lunatic) at the crossroads of circus, Body Mind Centering and anthropology and is preparing her new creation BABEL which will be released in spring 2023. 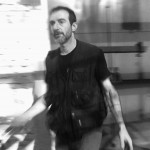 In performing arts for more than 28 years, after some studies in the technical fields and some stage experiences, he began his professional life with “Clémançon Scènes”. Very quickly, he returned to the Dordogne to successively take over the management of several stage performance companies for 10 years. The crisis of the thirties, pushes him to put management aside, to return to his passion: the live performance. Since then, he has collaborated with several companies such as Cie des Claviers, Cie Temps Present, Cie Mauvais Esprit, Cie La Truc, Cie Jakart, Cie Théâtre Espace, but also the Pôle National des Arts du Cirque. 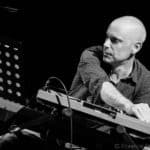 Since 1998 he has been conducting musical research with the scriptwriter and singer Jean Pol Fargeau (screenwriter for Claire Denis, notably Léos Carax), with whom he tests various forms of text / music relationship. (Léal at the Scène national le Volcan au Havre in 1999, IWC, fiction France-Culture in 2002 with the actor Yann Colette, Act3 in 2003). He also performs on the jazz and improvised music scene with musicians like Serge Lazarevitch, Eric Barret, André Villéger, Akosh S. Fantazio, Jeane Added. Founding member of the Melc group (Gildas Etevenard, Gilles Coronado Denis Jones), he also participates in the collective Phosphène with whom he records two albums, he also performs on the French song scene with Oshen (first part of Bénabar, Brigitte Fontaine, Miro , Alain Bashung. Jacques Higelin, AnaÏs…). He recorded the second album at Studio Acousti with Vincent Ségal, Cyril Atef, Jeffrey Boudreaux, DJ Shalom. A teacher of artistic instruction in current music, he teaches in particular at the National School of Music in Avignon and coordinates the Jazz Musiques Actuelles department. 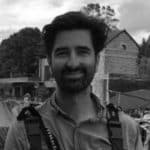